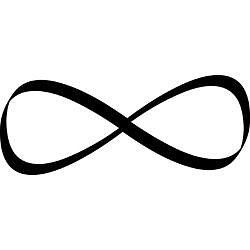 While a pastiche is a work of visual art, literature or music that imitates the style of a piece of work of one or more artists; unlike parody, pastiche celebrates, rather than mocks, the work it imitates. In my case and in this context, I attempt to do both celebrate and mock. What interests me is the idea of drawing lines from the lines that are already drawn by another…extend these lines, until the work loops back into a critique of the work, by adding missing elements sampled in what is actually repressed within the work itself as well as the space it is exhibited in. in doing so, I like to deconstruct the aspirations in the work itself and question each of them. In this particular project, pastiche has more the shape of the infinity sign, rather than the ouroboros, which is the snake biting its tail. The infinity symbol is an abstract concept describing something without any limit and is relevant in a number of fields, predominantly mathematics and physics. The English word infinity derives from the Latin infinitas, meaning ‘’the state of being without finish’’, and which can be translated as ‘’unboundedness’’, itself calqued from the Greek word apeiros, meaning ‘’endless’’…

A silent short-film, recreating a scene from Persona by Ingmar Bergman, with Madison Killo as Bibi Andersson and myself as Liv Ullmann

Video recreating the video of a song omposed and performed by Serge Gainsbourg  in duet with his daughter  Charlotte Gainsbourg, here with myself and my son Ovide.