Part 4 of a Série Noire 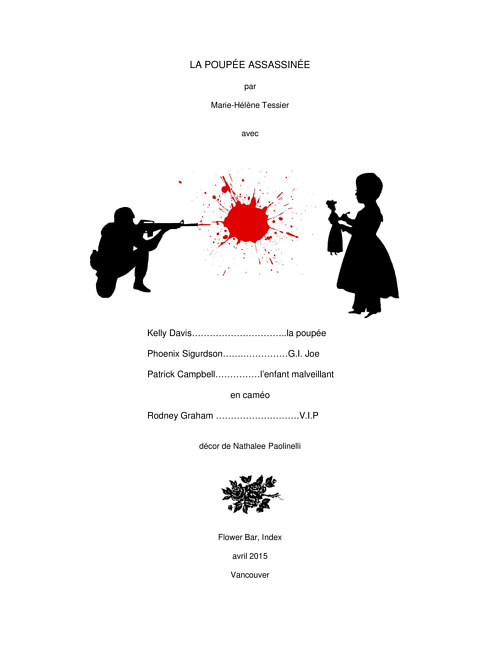 During an art opening, I sent a simple "mise-en-scène delivery"...Parked under a bridge near by the gallery, I first sent Doll. All I told her was to move through space as if she was living in the 4th dimension; the space of imagination. Twenty minutes later, I sent Gi-Joe with a paint-ball gun. All I told him was to make a clearing and shoot Doll. As Doll died at the feet of the VIP of the night (RG), by pure chance, and as Doll decided to play dead for longer than welcome (because being killed and playing dead is the ultimate for an actor), the host, (PC), was mortified, thinking Doll and Gi-Joe would ruin his perfect VIP night and as he tried to stop the play several times, and  both undertook to mistreat Doll, the same way children would mistreat the toy in lieu of its owner, while the owner is away...unzipping her dress; throwing away her shoes, pinching her soft body...but because Doll lives in the fourth dimension, she did not feel anything. Plus she was dead anyway. Imagination saves us from falling into the void of human suffering. It was the first time I would not assist at my own play, prefering my story told to me by my own characters and a few witnesses. An essay in the pastel version of primary colours: Doll's baby blue dress; her wheat blond hair and a little bit of pale red, near the heart.